On 12th December, 2017, Fuji Engineering Vietnam Co., Ltd held the inauguration of the apartment for rent Famille Ha Nam. This is the first 100% foreign invested project in the field of hotels, service houses in Hanam province.

The Famille Ha Nam project is a service apartment project for Japanese people with 76 rooms; of which 09 rooms have an area of ​​26 m2, the remaining room is 54 m2. In addition, the apartment also supports the facilities: office for rent, golf course, gym, meeting room, restaurant, and supermarket …

At the ceremony, Mr. Osamu Yasuhara – Chairman of Fuji Group thanked the support and assistance of leaders from central divisions in general and Ha Nam province in particular who has facilitated the project to complete on schedule. The project in operation not only meets the needs of foreign investors, but also contributes to improving the infrastructure of high standards, creating favorable investment environment for enterprises when invest in Ha Nam province.

At the ceremony, Mr. Mai Tien Dung – Member of the Party Central Committee, Minister, Chairman of the Office of the Government highly appreciated the project Famille Ha Nam, confirmed that this an important event, and this is a significant project when Japan and Vietnam are becoming important partners. In recent years, Japan has always been the leader in providing ODA to Vietnam, the second country with many enterprises investing in Vietnam and the third country in terms of two way trade with Vietnam. Vietnam always creates conditions and the best investment environment for Japanese enterprises. 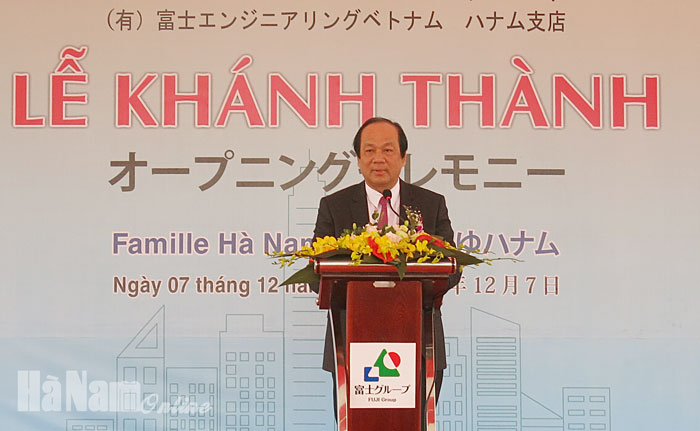 The Minister-Head of the Government Office asked the leaders of Ha Nam province to give priority to Japanese enterprises investing in the province; put in actions of 10 commitments with foreign investors in general, Japanese investors in particular. Concurrently, he requires Ha Nam province to resolve difficulties for investors, creating the best conditions for foreign enterprises to invest in the province with high efficiency.

Mr. Nguyen Dinh Khang – Member of the Central Party Committee, Secretary of Hanam Province Party Committee highly appreciated the implementation of the Famille Ha Nam leasing apartment to the operation. He expressed his confidence in the process of production and business activities, the project will achieve revenue and high efficiency; Local authorities will strictly comply with commitments with investors in general, and Fuji Engineering Vietnam Co., Ltd. in particular. The Secretary of the Provincial Party Committee also asked the departments, branches, People’s Committee of Duy Tien district to create favorable conditions for Fuji Engineering Vietnam Co., Ltd to workout the most efficiency.